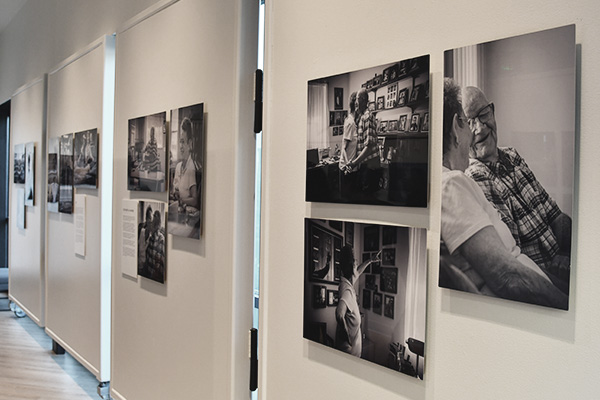 "Faces of Dementia" documents the everyday lives of individuals with dementia and their caregivers.

“Faces of Dementia,” the latest exhibit featured in the Lyndsley Wilkerson gallery on the first floor of the Sorenson Center for Clinical Excellence, aims to bring viewers into the lived experiences of individuals with Alzheimer’s Disease and dementia.

The exhibit coincides with the opening reception for the Alzheimer’s Disease and Dementia Research Center (ADRC) at Utah State University, a new statewide center that seeks to provide research and support for individuals suffering from Alzheimer’s disease and other forms of dementia, as well as their caregivers.

Through striking black and white portraits shot by documentary photographer Maria Ellen Huebner, the exhibit features four Cache Valley residents with Alzheimer’s disease and their caregivers engaging in daily activities within their own homes. The exhibit shows the full, complex spectrum of emotion interwoven with everyday life with dementia—loss and longing, but also joy and hope.

During the gallery’s opening reception, Beth Fauth, director of the ADRC, explained the time and care that went into finding the right photographer for the project. Entering individuals’ private homes to capture intimate details of their lives that many people do not see from the outside requires intentionality and respect. When she came across some of Huebner’s recent work taking poignant, socially-distanced portraits of families on their porches during the pandemic, Fauth knew Huebner was the right person for the task.

“Allowing somebody to come into your home and take pictures of you and your loved one where you don’t have makeup on, it’s just you doing your normal everyday thing, it takes a lot of vulnerability,” said Fauth. “Maria really is the absolute perfect person for this job. She connected so well with the families.”

In her gallery biography, Huebner indicated the impact the project had on her personally. “I was surprised at how deeply emotional the ‘Faces of Dementia’ project was for me,” she said. “Watching the enduring love of family members who are living with this disease tugged at feelings and thoughts I did not know I had.” Huebner hopes that viewers will have some of these same feelings as they experience the exhibit.

Fauth also recognized the individuals who served as models for the project, many of whom were in attendance at the opening reception for the exhibit. “They made it so easy for us, and were advocates for this project from the beginning,” she said, describing some of the conversations and interactions she had with the models and their loved ones. “It definitely reminded me why I love my job so incredibly much.”

As visitors walked through the gallery on opening night, a playlist of the models’ favorite music deepened the connection to the hearts and minds of those featured in the exhibit. Many of the models and caregivers were visibly moved as they saw themselves and the people they love captured with such thoughtfulness.

That richness of connection and emotion is exactly what Fauth was hoping to convey. “At the beginning of this process, we talked about reminding ourselves why the center is here,” said Fauth. “It’s not research for the sake of research; it’s research for people living with the disease and their caregivers.”

At the conclusion of the exhibit’s run in the Wilkerson Gallery, the pieces will hang permanently in the ADRC’s space on USU campus.

“Faces of Dementia” is open to the public through the end of October during the Wilkerson Gallery’s regular weekday hours (8:00am-4:30pm).