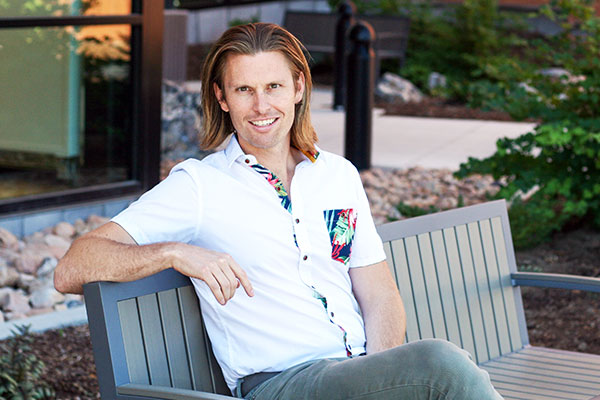 Tyler Levefor is an assistant professor in the Combined Clinical/Counseling Psychology program at USU.

USU Psychology professor Tyler Lefevor’s research was published in the American Psychological Association’s Psychological Bulletin this week. In the article “The Relationship Between Religiousness and Health Among Sexual Minorities: A Meta-Analysis,” a research team led by Lefevor examined numerous scientific studies over several decades. The team includes Ward Davis of Wheaton College, Jaqueline Paiz of Indiana University, and Abigail Smack of the University of Memphis.

Lefevor’s fascination with this research topic began with observations from his own life. As a self-described queer Mormon, he felt that both the religious and the LGBTQ communities had biases and beliefs that did not accurately reflect his experience.

During his career, Lefevor observed a strong narrative that “religion is always inherently harmful to sexual minority communities.” In the meta-analysis featured in the Psychological Bulletin, Lefevor and his team summarized the results of 73 studies from the last 50 years; they found that the reality was much more complex than this single narrative.

Although a majority of those belonging to the LGBTQ community are not religious, for those who wish to keep religion or spirituality as a part of their identity, the research shows it can have a positive impact on overall health. (This positive impact is approximately half as helpful for sexual minorities as it is for those who are heterosexual.)

Religion is complicated for sexual minorities; but for those who feel accepted and loved, it can be healthy to connect with religious resources and communities that support the way they see the world.

Referring to his own experience in the Church of Jesus Christ of Latter-day Saints, Lefevor says, “I didn’t want to have to suppress the part of me that carried positive legacies from the church. To this day, I have a regular running habit, and I strongly prefer sugar to alcohol.” Some LGBTQ   people wish to stay connected to a religion or retain part of its influence. Those ties can diminish over time, but even with a short-term connection, having a religious community that shares a societal structure or worldview can be positive.

Lefevor also emphasizes the reality of those experiences that propel the “religion is always harmful” narrative. Approximately half of the studies analyzed by the research team found that religion indeed had a negative impact on sexual minorities. Lefevor does not want those who have been harmed to feel that this research minimizes or invalidates their pain. “Religion can be harmful for sexual minorities, and this meta-analysis doesn’t dispute that,” says Lefevor. “It just adds more information to create a bigger picture. People are dynamic, changing beings.”

Whether or not to retain a connection to religion is not necessarily an either/or decision for those in a situation with layers of complexity. If an LGBTQ person feels accepted, the negative aspects of a religion will not necessarily cancel out the positive aspects.

On the other hand, Lefevor stresses that it is not unhealthy to hold strongly negative feelings towards religion. “Keep in mind that most people in LGBTQ communities have had traumatic experiences and that it will be a sensitive subject. But for those who are feeling safe and validated in their religion, the narrative that religion can never be good for them is also damaging. I believe in everyone finding their own path.”

In Lefevor’s own experience, “The church was a source of happiness for me for much of my life, and I feel safe enough to know that it’s okay to hold these opposing feelings.”

Tyler Lefevor is an assistant professor in the Combined Clinical/Counseling program in the Psychology department of the Emma Eccles Jones College of Education and Human Services at Utah State University. He received his PhD in counseling psychology from the University of Miami, after which he completed a year-long postdoc at Stanford University. Lefevor teaches courses at USU in the psychology undergraduate program and the combined clinical/counseling PhD program. His research examines how and when religiousness is related to health among sexual and gender minorities to better inform psychotherapy and public policy. He also examines health disparities experienced by sexual and gender minorities, particularly those from a conservative religious background.