Racing Toward the Future with GEAR UP 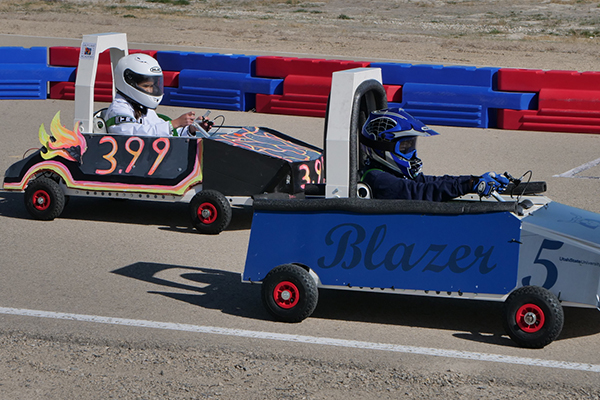 Students from 13 Utah schools recently gathered in Tooele to race small electric vehicles at the annual Mountain West Grand Prix, hosted by USU’s Gaining Early Awareness and Readiness for Undergraduate Programs (GEAR UP) program. This hands-on STEM education event is the only one of its kind in Utah.

At this year’s Grand Prix, 20 teams of students gathered to race single-seat electric cars assembled using frames and motor kits provided by GreenpowerUSA. Students were tasked with finding innovative ways to maximize their car’s battery life to complete as many laps as possible in 90 minutes. Some teams were first-time participants this year, while others were returning from previous years with improvements on cars from past races. Hosted at the Utah Motorsports Campus, the Grand Prix was the culmination of months of hard work for the students.

Edith Bowen Laboratory School (EBLS), a K-6 public charter school located on USU campus, has been a regular participant in the Grand Prix. This year, EBLS had six teams at the races: three cars in the “Goblin” class, which is for students in grades 4-6,  and three cars in the more competitive “F24” division for middle and high schoolers. Three of these cars placed in their respective events, with a Goblin called Bluester taking first in the elementary school race.

The Mountain West Grand Prix provides a unique opportunity for students to gain experience in math, science, and engineering topics, which is invaluable in preparing them for success later on in life. Kristin Brubaker, director of two GEAR UP grants at USU, emphasized the importance of hands-on learning in sparking passion and teaching students important skills.

“While telling a student about a college major or a future career might pique their interest, giving students the chance to experience the subject is going to engage them at a deeper level and get them thinking about next steps within the field,” Brubaker said. “STEM might be the focus of the GEAR UP grant, but GreenpowerUSA allows them to learn about other subjects too: they learn fundraising, communication and marketing, and life skills such as teamwork.”

The 2021 Mountain West Grand Prix has been featured on Fox 13 News, Cache Valley Daily, and NPR.

USU STARS! GEAR UP is part of the Center for the School of the Future in the Emma Eccles Jones College of Education and Human Services at USU. GEAR UP is a national, federally-funded pre-collegiate grant program that is designed to increase the number of low-income students who are prepared to enter and succeed in postsecondary education.