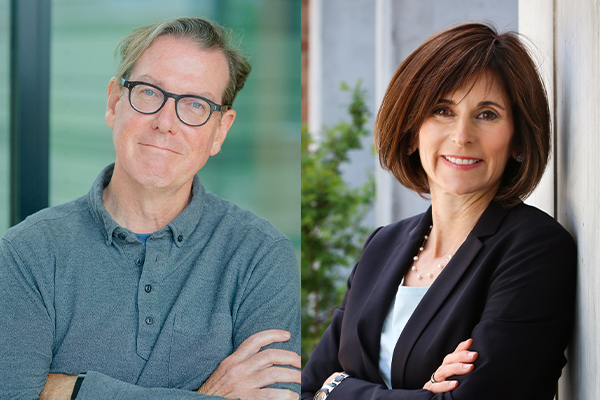 Dr. Gregory Madden (USU) and Assistant Professor Kerry Kelley (U of U)

Dr. Gregory Madden, a psychology professor in the Emma Eccles Jones College of Education and Human Services at Utah State University, is working with professors from the University of Utah to create electronic displays that can help curtail air pollution from idling vehicles.

Led by University of Utah chemical engineering assistant professor Kerry Kelly, the research team is developing real-time air quality displays to encourage drivers to turn off their vehicles rather than idle in front of places like schools and hospitals. The displays are similar to the flashing speed limit displays that have proven effective at helping motorists to slow down on the roadways. The team has received a $1.2 million grant from the National Science Foundation to develop this project.

Kelly, principal investigator on the grant, reached out to Madden because of his expertise in behavioral economics.

“My research focuses on impulsive decision-making, and this is a very socially significant topic; I was also excited to be involved with this cool technology,” Madden said. He explained that people often behave impulsively because of the natural human preference for immediate gratification. “Idling your vehicle gives the immediate gratification of the heater staying on, etc.,” he said. “Although pollution creates long-term problems, we don’t feel the immediate effects of those small decisions.”

Madden says that when people immediately get the reward of knowing they are reducing pollution, especially when it could be impacting vulnerable individuals, like children with asthma, their behavior will change.

The new signs can give immediate feedback to drivers about local air quality, as sensors detect the air quality in the micro-environment outside the school or hospital. Infrared sensors can detect an engine being turned off, so the display can change as air quality improves. The sign could flash with a message that says, “One driver just turned off their engine! Thank you!” or “It’s getting better!”

Madden is creating community-specific messages for the displays that will motivate drivers to make environmentally conscious choices. Sara Peck, PhD graduate student and study coordinator working under Dr. Madden’s supervision, is working with the schools to test different messages and see which ones are most effective.

The pilot project will involve placing signs at drop-off zones at one school and one hospital each in Salt Lake and Cache counties. Intermountain Healthcare, which operates 24 hospitals in Utah, is working with the team of professors to begin the pilot project in the winter of 2021. A sensor display is also planned for installation at Bear River Charter School in Logan in the winter of 2022.

Researchers estimate that idling wastes about six billion gallons of fuel each year, and, according to the U.S. Department of Energy, personal vehicles generate around 30 million tons of toxic carbon dioxide through idling alone. Seven states, including parts of Utah, have restricted idling.

“Our hope,” said Madden, “is that schools and hospitals can have lasting reductions in pollution and reduce harm to the health of children and other vulnerable people.”

The project has been featured by KSL News and included in a televised news segment. Dr. Madden has also been interviewed about his participation in the project by Cache Valley Daily.