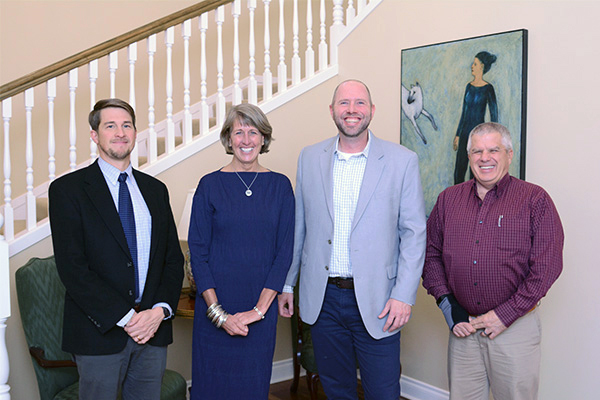 Dr. Shawn Whiteman of the Human Development and Family Studies department in the Emma Eccles Jones College of Education and Human Services was recently honored for his promotion to professor. This achievement, called “the ultimate rank that you can have in the academic world” by USU President Noelle Cockett, was celebrated in the home of the president with a reception and an inaugural lecture from Dr. Whiteman.

Shawn Whiteman was born and raised in suburban Philadelphia. He earned his Ph.D. in Human Development and Family Studies at The Pennsylvania State University. Following an 11-year tenure at Purdue University in West Lafayette, Indiana, Whiteman came to Utah State in 2016, where he currently lives with his wife and two daughters as he continues his research on sibling influences in the family.

“Despite declining fertility rates in the United States, almost everyone in the U.S. grows up with a brother or sister,” Whiteman said. According to his research, 80-85 percent of children in America grow up with at least one sibling – which is a larger percentage than that of children who have a father in their home. Youth spend more time with their siblings than with any other relational partner up until their late adolescence, but these relationships are understudied despite their unique influence.

Whiteman and his colleagues are striving to fill this gap in research by studying the ways siblings respond to each other’s influence, whether that be through emulation of modeled behavior or differentiation from behavior that is perceived as undesirable. Studying these complex interactions can help us understand the specific mechanisms through which brothers and sisters shape each other’s development, especially with regard to behaviors such as substance abuse.

At the conclusion of his lecture, Dr. Whiteman expressed appreciation for the love and support of his family, friends, and colleagues.