Who Was Emma Eccles Jones 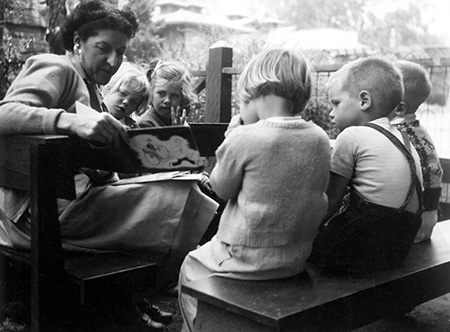 The Emma Eccles Jones College of Education and Human Services took its name from a longtime friend and philanthropist. Her ties to the College extend to its very beginnings.

She became Northern Utah’s first Kindergarten teacher in 1926, after her former geography teacher, Miss Edith Bowen, persuaded her to put her new degree from Teachers College at Columbia University to use.

Emma agreed and donated her own salary. Since little desks could not be found, tables’ legs were shortened and little chairs were hunted up. The next year, easels were added to the classroom. By then, the class was full and a waiting list started for parents who wanted their children to attend.

“Our room was just wonderful, like walking into another world,” recalled Barbara Budge Howell, one of those early students. “It was a happy classroom, yet it was a tight classroom. You were welcome to anything you wanted, but when you were done with it you had to put it away.”

In 1927, Utah State University started a school of education. In 1928 it established a teacher training school, absorbing Whittier into its program. It became a place where student teachers could experience hands-on learning.

Emma continued on as a teacher while the program evolved. Her dedication continued long after she stopped teaching and would later result in enormous support for the College which now bears her name.

In addition, she established a distinguished professorship and endowed chairs in early childhood education, supported programs and supplied equipment.

She passed away in 1991, but her legacy—and her influence in early childhood education—lives on.