When the Going Gets Tough, Scratch On! 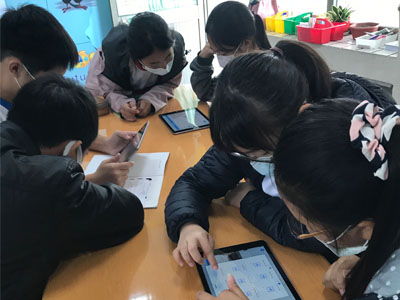 Emmy Jensen, a remote Masters student for the Instructional Technology and Learning Sciences department, recently received approval from administrators at Shengli Elementary School in Taiwan to use Scratch as part of her curriculum.

Scratch is an online community that utilizes a visual programming language so that children can program and share interactive media such as stories, games, and animations with students from all over the world. Jensen, who teaches English full time at Shengli Elementary School in Tainan, Taiwan, utilized this tool to create a course to help better develop her students' skills in English, programming, and computational thinking.

Jensen's goal was to create a Scratch-based international culture exchange project with an audience of peers in the U.S. receiving her students' multimedia masterpieces showcasing their local Tainan culture in Taiwan. In turn, the U.S. students would send their projects about their local culture, and each school would provide feedback on and remix the other's projects.

Once Jensen found a school in the United Stated to participate, she received approval from the administrators of Shengli Elementary to implement the international culture exchange project for her 2020 sixth grade classes.

All was going smoothly until the breakout of COVID-19. Being a high-risk area, many schools in Taiwan were temporarily shut down. After delaying the semester for two weeks, Shengli Elementary continued their in-person classes but were required to follow extreme precautionary measures.

"We were prepared to transition to remote teaching at any moment," said Jensen, "but I assured the participating exchange class in the U.S. that if we moved online, we would still complete the project. I needed this project to keep the kids engaged in this course, and nothing was going to stop me!"

Though Jensen had an unconquerable determination to complete her end of the project, there were still problems outside of her control. The pandemic worsened in the United States, and Jensen received an email from her partnering class stating that they wouldn't be able to participate in the project.

Despite being heartbroken and drained, Jensen's determination to find another way to allow her students to complete their projects never faltered. She began searching for another class to participate by messaging everyone she knew and sending out social media posts and emails seeking another school to take on her project. After about a week of searching, a message from "the true hero of this story" Dr. Deborah Fields appeared in Jensen's inbox stating that she had found a school willing to participate, as well as "an army of additional student commenters."

After helping over 200 students spend 7+ hours producing culture-related Scratch projects, Jensen was relieved to receive Fields' help. Before long, Fields and Jensen were able to set up the new exchange with a school in California.

One by one, comments started appearing on the students' projects along with their remixes. Jensen stated that "the classroom buzzed with both excitement and a touch of panic as teams suddenly scrambled, grasping for their reading comprehension skills, dictionaries, and Google Translate." Students were thrilled to see that their counterparts in the U.S. were engaging with and responding to their projects.

"In the middle of a chaos-spewing pandemic, our students still managed to shake hands with peers on the other side of the globe," Jensen stated, adding that all the work required to see the project through was worth the payoff. "I'll never forget the looks on my students' faces as they opened those first comments, and their sincere enthusiasm to reply using their best English skills to understand and communicate authentically. No doubt they will one day look back and realize we weren't stressing about their spelling or grammatical errors, or even their ability to code. Our true goal was to connect and empower them as learners."