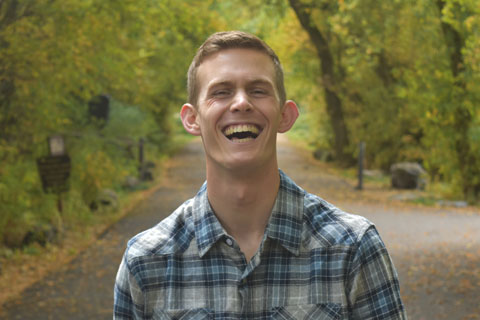 Hayden Manning is the current webmaster and media manager for the Instructional Technology and Learning Sciences department. He recently declared Human Experience Design and Interaction (HEDI) as his major.

Manning’s interest in web development and graphic design started in middle school in an exploratory communications class. He expressed his newly found interest to a close friend, who then gave him an opportunity to work as an intern as a web developer and digital marketing manager for his company. After a year of interning, he was hired as a part-time employee. There, he discovered his desire to work in the field of technology.

Since Manning’s internship, he has worked as a digital marketing manager, web developer, graphic designer, social media manager, and as an IT support specialist.

Manning first learned about the new HEDI degree while he was speaking with his academic advisor. “I explained to her that I was interested in Computer Science, Graphic Design, and Marketing, but I wasn’t sure which I wanted to pursue as a major,” he said. “She then redirected me to Michelle Wilson, who informed me that the HEDI degree encompassed all of my interests and more! It seemed like the perfect fit.”

When Manning's not working, you might find him on a cliff or a hiking trail, taking pictures of the stars, socializing, or on his couch critiquing movies.

When asked what has helped him during the pandemic, Manning responded, “Reaching out and helping other people. We are all living through the same difficult circumstances and I feel that, right now, everyone is need of some sort of help and support. It feels good to make even the smallest of positive differences in somebody's day. I would highly recommend that people start looking for new and creative ways to help each other all while staying safe.”