ITLS Students Team Up At SaltCON 2020 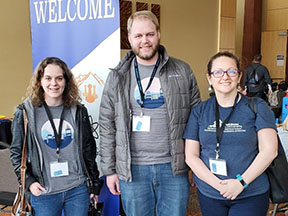 The 4th annual SaltCON was more than fun and games for the Instructional Technology and Learning Sciences team of students in attendance earlier this month.

The event is family friendly and focuses on hobby and designer board games, drawing more than 1,000 attendees annually. ITLS alumna Stephanie Benson, who now works for the Leonardo Museum in Salt Lake City, was one of the first students to attend Utah’s largest board game convention a few years ago.

The 2020 participants from Utah State University’s Emma Eccles Jones College of Education and Human Services took the opportunity to learn as much as possible about the world of game design, according to Dr. Katarina Pantic, who recently completed her doctoral degree in ITLS.

“Over the years, we have had so many firsthand opportunities to talk to game designers, learn about the design process, test prototypes of games and simply have fun trying out new games,” Pantic said. “This year was no different!”

Among the stand-outs this year was the gaming company, Binary Cocoa, because of the company’s professional approach to game design, Pantic said. For example, their Frog Chess game was built with accommodations for visually impaired players.“They did that by designing the frogs for different players to have both different sizes and shapes, and the colors they chose were easy to distinguish if you were color blind,” Pantic said. “They even developed an app to demonstrate the accessibility of their game.”

Another impressive feature of the company’s design was the quality of their prototypes. Although they plan to print the game on fabric, the extensive prototype included 3-D features such as a coffee table, hardwood floor and other tiny furniture.

“This prototype immediately drew out attention at the convention and we really enjoyed playing several of their games,” Pantic said.

Given the current social distancing requirements of the Covid-19 pandemic, there has never been a better time to play games with roommates and family members at home.

If you are looking for cheaper games, we suggest you try some of our all-time favorites, such as the Skull King (2-6 players, moderate), Duel (2 player game, complex) [note this game has a version for more players called 7 wonders], Azul (original, 2-4 players, easy), Trekking the National Parks (2-6 players, moderate), and or Ticket to Ride (this one has several versions, such as Europe, USA, etc.).

Interestingly, quite a few games are available online and can be played with people that are not present in the same geographic location.

“We are yet to try these online versions, but we can attest that their physical versions are quite good,” Pantic said. “Granted, playing Pandemic may be a bit too much for any of us these days, but it is actually a really good collaborative game.”