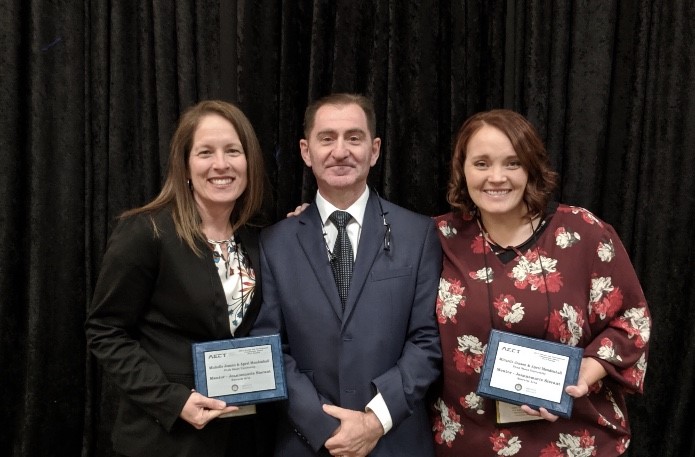 Michelle and Aprel with the judge who awarded them first.

NATO is following a most promising lead in its quest to connect its employees from 29 different nations. A unique training solution designed by two Utah State University graduate students just took 1st place in an international design competition. The winning prototype, designed by the team using available technology has great potential for world-wide deployment.

Michelle Jensen and Aprel Mendenall, masters students in USU’s Instructional Technology and Learning Sciences Department in the College of Education and Human Services, won top honors in the Design and Development Competition at the Association for Educational Communications and Technology (AECT) International Conference in Las Vegas on Oct. 22. AECT features thousands of members from academia and industry, who work to improve adult learning through technology by researching and producing communications media for instruction.

The 2019 AECT Design and Development Competition, sponsored by the North Atlantic Treaty Organization Allied Command Transformation (NATO ACT), required competitors to research microlearning and recommend a plan to implement it to train NATO officers. Judges found that the solution created by Jensen and Mendenhall won in terms of theoretical excellence, creativity and feasibility.

In fact, Salih Cem Kumsal, Training Technologies Staff Officer from NATO, was so impressed with the duo’s prototype that he asked them to present their design at the NATO Training Technology Conference in Virginia Beach in June 2020.

“He wants to consult with us and incorporate our ideas into a microlearning platform for NATO officers and staff,” Mendenhall said.

NATO, an intergovernmental alliance formed in 1949 after the end of the Second World War, is looking for educational technology that can be used to train new employees and provide ongoing instruction to all staff members, even during deployment. The agency also has a large population of employees whose retirement is pending.

“One of the things NATO was concerned about was capturing tacit knowledge from within the organization,” Jensen said.

Another problem the team tackled with their submission to the competition is connecting officers from all over the world with different political, ethnic, cultural and philosophical points-of-view.

“We believe the socialization element of our app will encourage officers and staff to build valuable relationships,” Mendenhall said.

Jensen and Mendenhall said they found invaluable consultants and resources in many mentors, including Jeannemarie Sierant of Socratic Arts in Chicago and Dr. Kristy Bloxham, ITLS professor who is a previous finalist in the AECT competition. Their ITLS courses provided a solid foundation, the collaborators agreed.

Specifically, they created Knowing NATO, which contains microlearning modules based on NATO-generated and user-generated content, social connections and motivational elements (they can earn badges, get “likes” and followers) to encourage users to share their knowledge.

“Part of our plan was to create this socialized app that motivates people to submit video snippets, articles, podcasts, infographics to share with others,” Jensen said.

Dr. Andy Walker, ITLS department head, said he was impressed with the team’s responsive-design capabilities. At a reception on the eve of the competition, Jensen and Mendenhall asked a NATO official about the top five concerns facing the organization.

“Like any great designers, Michelle and Aprel were collecting data right up to the last minute,” Walker said. “Based on some of his responses, they restructured their presentation to emphasize capturing institutional knowledge.”