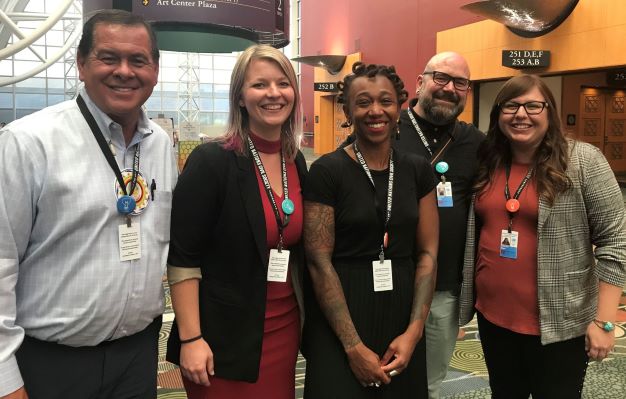 On August 27th, the team presented details of a collaborative project at the UN conference, which featured approximately 8,000 attendees from over 80 countries. Occasionally held globally in cities such as Paris and Melbourne, the most recent conference in Salt Lake City marked the first time the event was held in the United States outside of the UN headquarters in New York City, New York.

Chairman Darren Parry from the Northwestern Band of the Shoshone Nation (NWBSN) and Adam Sherlock and Gabriella Huggins from Spyhop Productions, a nonprofit youth media arts company based in Salt Lake City, explained their roles in the development of place-based storytelling with emerging technologies in their respective cultural and community work.

Litts, who is also the director of USU’s Learn Explore Design Lab, partners with community members to collaboratively design stories connected with place and culture, as well as investigate how people learn through this design. The team of designers for this project, called Boa Ogoi, includes youth and elders from the NWBSN. Together, they are creating an experience with augmented reality technologies to share the Tribe’s story of the Bear River Massacre Site at a planned Cultural and Interpretive Center in southern Idaho.

The Bear River Massacre site, currently marked by a plaque four miles north of Preston, Idaho, was largely overlooked by historians until it was designated a National Historic Landmark in 1990. The murder of 350 Northern Shoshone men, women and children at their winter camp on January 29, 1863 was the largest massacre of Indians in U.S. history. The Tribe has acquired more than 700 acres of land where the massacre took place and is planning facilities and programs in cooperation with several supportive agencies. The goal of the project is to instill in all a reverence for the sanctity of the land and a better sense of its importance to those whose culture is tied to it, according to the NWBSN Letter of Inquiry.

Litts said a goal of the UN presentation about this collaborative project was to share the power of place-based storytelling in bringing people together, especially through sharing different perspectives.

“We wanted to make transparent our partnership-building process for others to potentially learn from,” said Litts, who has developed similar projects, for example, using technology to strengthen relationships between contentious youth groups in Northern Ireland. “We presented the partnership-building process - how it came to be, what the global implications are and what it can look like in other countries.

Megan Hamilton, a member of the Minnesota Chippewa Tribe and doctoral fellow for the ITLS Department, had an opportunity to present and share more about the work of the Learn Explore Design Lab at Utah State. She told the UN audience how she uses technology as a means for youth to build their cultural identities while also engaging in design. Hamilton also serves on the parent council for the Title VI Utah Northern Native Connections youth program, which serves 430 Native American youth in Box Elder, Cache and Logan City school districts. She said she realized a disconnect between the educational activities being presented in schools and the need for young students to connect with a vibrant heritage.

“I just felt like formal education opportunities are really lacking in terms of developing cultural identity,” Hamilton said. “We can definitely do better for Indigenous learners.”

The UN Conference gave Hamilton the platform to share one solution she came up with, which was a video game design camp that was implemented this past summer in partnership with the Title VI Northern Utah Native Connections program. This camp, supported by a National Science Foundation grant awarded to Drs. Bryan Brayboy, Kristin Searle, Breanne Litts and Yasmin Kafai, enabled Indigenous youth to further examine their culture while creating unique, culturally-responsive video games.

Litts and Hamilton said the UN Conference presentation demonstrated how a partnership approach can impact local communities around the world, especially in regard to preserving cultural identities in endangered cultures. As one part of the larger collective involved with the Boa Ogoi Cultural & Interpretive Center at the Bear River Massacre site, the designers may have to amend plans to integrate advances in technology over time, but one thing will remain unchanged.

“This is a community-driven effort to really engage the public in a story that has historically been marginalized. It is an honor to be part of such a significant project, and to get to share it with the United Nations,” Litts said.