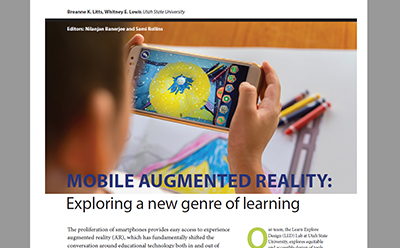 Dr. Breanne Litts and Whitney Lewis (ITLS alumna, 2018) published an article in the Association for Computing Machinery’s (ACM) GetMobile, which has recently been made available online.

The authors argue that new technologies enable new forms of learning. In particular, they wrote about how narrative-driven, place-based augmented reality technology (think of Pokemon Go) can be used to help young students learn design and computational practices as well as engage in cultural and civic issues. Dr. Litts and Lewis wrote, “As mobile technologies reach ubiquity, educators have become exceptionally concerned with designing tools and activities that equip young people to engage with these technologies as producers not just consumers” (Litts & Lewis, 2018, p. 5). By making games using place-based, mobile, and augmented reality technologies, they argue that young people are able to meaningfully engage in local and community issues.

Dr. Litts and Lewis mention that when young people design in the context of multimodal and interdisciplinary problem spaces such as this, young people also learn various design and several computational concepts including: “algorithmic thinking, debugging, and conditional logic [e.g., using if/then statements]” (Litts & Lewis, 2018, p. 6). One unique insight they provide is how young people grapple with complex computational practices such as debugging using technologies such as augmented reality that cross physical and digital worlds. “We learned a lot about what’s possible and how this impacts learning,” Dr. Litts explained.

The research presented by Dr. Litts and Lewis was a collective effort of the Learn, Explore, Design Lab at Utah State. Over two years, the LED Lab conducted “four after-school workshops during which [33] learners [ages 9-17] produced their own mobile augmented reality games” (Litts & Lewis, 2018, p. 6). The article features many rich examples, including quotes from students’ experiences using the app.

“I loved working with these kids,” Lewis explained. “They catch on to technology so quickly and always had such unique ideas … If nothing else, we’ve helped those kids grow their identity in computer science.”

“I’ve been working with this specific platform (ARIS) for nearly a decade and I still learn something new in every single workshop,” Dr. Litts said. “There are known issues and quirks in the platform we use, but it was particularly interesting to see the strategies these young people used to get around them. For example, to understand the computational algorithm that controlled how digital characters appeared in their games, they iteratively made digital adjustments and then ran outside to test it out … Rather than trying to understand the algorithm in front of the computer, they preferred to run outside and figure it out that way. Through embodiment, they were able to understand what the numbers in the algorithm meant.”

ACM’s GetMobile is dedicated “to promote research and development by bringing together researchers and practitioners and fostering interest in the mobility of systems, users, data, and computing” (GetMobile). ACM has published, for more than 60 years, “the premier venues to showcase cutting edge research, breakthrough discoveries, practical solutions to real world challenges, technology news, and commentary from the computing world’s thought leadership” (Association for Computing Machinery).

Dr. Breanne Litts is an Assistant Professor of Instructional Technology and Learning Sciences (ITLS) at Utah State University. She is also the director of the Learn Explore Design (LED) Lab at Utah State. “She investigates how people learn by and collaborate through making, designing, and producing and develops technologies and learning environments to support these interdisciplinary activities” (Dr. Breanne Litts’ Faculty Biography). Her research interests include identity, learning, design, and technology.

Whitney Lewis graduated with a master’s of science degree from the ITLS Department in May 2018. She currently works as an instructional designer at Intuit. As a student, her research interests focussed on “how people generate ideas and how supports can aid in the ideation process” (Whitney Lewis’ LED Lab Biography). In fact, she created a course about storyboarding in ARIS for the organization that created the app (Field Day Courses).

You can read the entire article about how the ARIS app can be used to promote computational thinking and community engagement on ACM’s Digital Library Website.

Dr. Litts explained there are several other conference presentations and proceedings associated with this research. “For example, this poster presented by Julie Lamarra at the Immersive Learning Network conference, which won best poster award," she said.